Would the World be Better If Women Ran It? 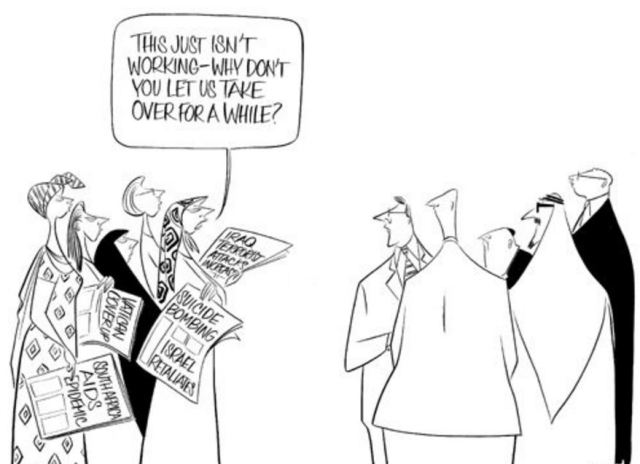 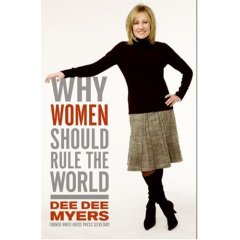 helle Cottle, a Washington reporter for the Daily Beast, said in The New Republic: “Every few years someone writes a book, publishes a study, or simply drops a quote suggesting what a kinder, gentler, less competitive, more collaborative, less power-crazed, and fundamentally more ethical place Washington would be if only the gals were in charge. When I was examining this bit of conventional wisdom several years ago, one of my favorite quotes was an admonition from Democratic Senator Barbara Mikulski to Republican Senator Kay Bailey Hutchison: ‘Civility must start with us.’ Former Clinton press secretary Dee Dee Myers pursued a related theme in her 2008 book, Why Women Should Rule the World.”

For the latest book proclaiming the female’s “superiority,” see MSNBC’s Dan Abrams’ March 2011 “Man Down: Proof Beyond a Reasonable Doubt That Women Are Better Cops, Drivers, Gamblers, Spies, World Leaders, Beer Tasters, Hedge Fund Managers, and Just About Everything Else.” (Shouldn’t Abrams have let a woman write this for him, since by his own words she could have done a better job? How should we expect young boys, who we want to remain non-violent, to react to this title? When I first saw the title, I thought “Man Down” was a spoof, a mockery of the media’s excessive praise of women. But then I realized that Abrams probably would never dare offend feminists.)

By Jerry A. Boggs

When I was a supervisor in the federal government, a few members of my team regularly let me know, subtly or otherwise, that they could run things better than I could, even though their experience in supervising was nil. You’ve no doubt encountered such individuals yourself: people who aren’t in charge but think they should be because they could do so much better. So it is with many ideological feminist women, and more than a few feminist men. You may have heard them say, “If we women ran things, the world would be a better, more peaceful place.” They have said this even though according to their own admission, women have had relatively little or no experience whatsoever in world-supervising.

“Who cares how men feel or what they do or whether they suffer? They have had over 2000 years to dominate and made a complete hash of it. Now it is our turn.” -Liberated Women, Boronia. (Herald-Sun, Melbourne, Australia – 9 February 1996) [Was the humor unintended?]

I have a computer folder which I dubbed “Women In Male Roles.” It’s a repository of articles, reports, and so forth about how women have performed in a traditionally male role or job. Taken together, all the items in the folder clearly indicate that women are no better morally and intellectually — and no worse — than men. And thank goodness! Knowing that men and women are just alike, are from the same planet instead of Mars and Venus, can make the world of gender a better place. The following selections — which I did not purposely seek out but merely stumbled upon, usually via my Google news alerts — from my “Women in Male Roles” folder range from the trivial to the serious. Whenever you hear someone suggesting that everything would be better if women were in charge, email him or her the link to this. You’ll contribute to making the world a better place! (Some female readers may find that many of the selections make them wince and cringe; I ask them to consider the disquieting news about men that males have had to endure for the last three or four decades.)

Here’s the ever-growing list of women performing in what was once “male” roles:

Here’s the sort of anti-male propaganda that has led many to think the world would be better off if run by women: “A peevish, grudging rancor against men has been one of the most unpalatable and unjust features of second- and third-wave feminism. Men’s faults, failings and foibles have been seized on and magnified into gruesome bills of indictment. Ideologue professors at our leading universities indoctrinate impressionable undergraduates with carelessly fact-free theories alleging that gender is an arbitrary, oppressive fiction with no basis in biology.” -Author and lecturer Camille Paglia, Time.com, December 16, 2013

“No disrespect to women, but they’re as idiotic as men for the most part,” said late-night comedian Jon Stewart on “The Daily Show,” September 5, 2012. “We all have our problems. It’s not like if we had more women, there would be no more wars.”

“Women are not inherently passive or peaceful. We’re not inherently anything but human.” —Feminist activist Robin Morgan See also “Women Doing Lousy Things,” “Equal Wrongs,” “The Myth of the Fairer Sex,” and “If Women Ruled the World, Nothing Would be Different“ by progressive feminist Lisa Jervis, who wants feminists to subscribe to many socialist ideas I disagree with.

Here is a partial list of the world’s female leaders as of October 2006:

Related: “Would the world be more peaceful if there were more women leaders?” -October 27, 2017 (Be sure to read the comments.)

Text (and photos, if used) are reproduced under the Fair Use exception of 17 USC § 107 for noncommercial, nonprofit, and educational use.

3 Responses to Would the World be Better If Women Ran It?