Why Women Are Leaving the Workforce in Record Numbers 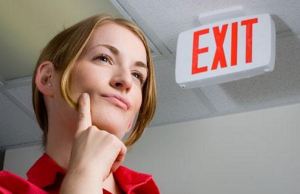 Lean in, lean back, stand up, sit down – everyone has advice for women wanting to get ahead. How about: Get a job?

One tiny problem may be holding women back: they are leaving the workforce in record numbers. The number of women age 20 and older not in the labor pool, according to the Bureau of Labor Statistics, has soared from 40 million in 2000 to nearly 49 million today; another 315,000 called it quits last month. The participation rate of women in the workplace has dropped from a high of 60.7 percent in 1999 to 58.8 percent today. [That slide continues:  In June 2019, women’s job participation rate was 57.2 percent.] By contrast, some 72.5 percent of men are either working or looking for a job.

What’s going on here? With all the focus on equal pay for equal work, and with opportunities continuing to expand for female employees, the exodus of women from our labor pool is surprising. And, possibly, a tad inconvenient for those charging that businesses still discriminate against women.

There are numerous explanations put forth to explain this trend. Most tend to identify two categories of workplace drop-outs: the first includes young mothers who are not highly educated and therefore not likely to earn enough to pay for childcare. Economically, these women are better off staying home.

The second (and more problematic) group consists of highly educated women who drop out (or “opt-out”) when they have children, even though they have the skills and income necessary to hire childcare. This latter bunch has economists and feminists alarmed for different reasons.

Economists consider the defections costly for the country; we need highly talented and trained workers. For feminists, the drop-out trend undermines their argument that women – even our most accomplished and best educated — are victims of discrimination. If the women most likely to enter the C-suite marathon increasingly choose to hang up their running shoes, why should we expect more finishers?

A recent study by Joni Hersch, professor at Vanderbilt Law School, makes that case. She looks at female graduates of our top universities – those presumably who have the best shot at shattering the glass ceiling – and finds that once they have children, they are more likely to quit their jobs than are women who graduated from less selective schools.

The numbers tell the story. Overall, Hersch reports that 60 percent of women who graduated from our top schools are working full time, compared to 68 percent who made it through less prestigious institutions. Married women without children from top schools are 20 percentage points more likely to work full time than those with children; the difference for graduates of lesser schools is 13.5 points.

Perhaps most astonishing is that only 35 percent of women who have earned MBAs after getting a bachelor’s degree from a top school are working full time, compared to 66 percent from second-tier schools.

So, as Hersch argues, if only a little more than one third of the best C-suite candidates continue to work after they have children, it is not surprising that women are not showing up more often in corporations’ top ranks.

This is not the only study that indicates our best and brightest females are voluntarily bowing out of the workplace. Stefania Albanesi, economist with the Federal Reserve, published a paper last year showing that college-educated women often leave the workforce when their husbands’ earnings surpass their own, allowing them to retire without the family taking a big financial hit.

Between 1993 and 2006, the number of college-educated women in the labor pool declined by 0.1 percent per year after growing at 2.4 percent per year from 1976 to 1992. The result was a loss of 1.6 million skilled workers. Albanesi attributes the change to sharply rising compensation for educated workers–particularly for men.

In 1975, college graduates were paid 43 percent more than those without a degree; in 2008 that premium had soared to 92 percent for men and 70 percent for women. Albanesi concludes that these women simply do not need to work, as their income has become less important to the family. She says the decision to retire has little to do with children since many women bow out long past the baby-stage.

Sarah Glynn, analyst for the Center for American Progress, takes “Pay Equity Day”, April 9 this year, to argue that the “wage gap”–women are paid on average only 77 percent as much as men – causes women to leave the workforce.* (One could argue that it is because women enter and leave the workforce more often than their male counterparts that they are paid less. Few studies have been able to isolate the effect of tenure on the job.)

Glynn writes, “It often makes the most economic sense for the parent with the lower salary to be the one to take time off…” Though the wage gap has been shrinking, Ms. Glynn, among others, would like to see more laws passed to make the penalties harsher for discrimination and to demand more accessible childcare for workers.

Such measures might help low earners juggle the demands of parenting and work, but it won’t do much to keep our highest achievers on the job. At some point, those frustrated by C-suite male dominance may have to face reality: many women enjoy life beyond the office.

After more than two decades on Wall Street as a top-ranked research analyst, Liz Peek became a columnist and political analyst. Aside from The Fiscal Times, she writes for FoxNews.com, The New York Sun and Women on the Web.

* About 20 years ago, Time Magazine, in its blind zeal to denigrate men and cast women as victims in all realms, started scaring working women in the worst way possible by trying to fool them with a vicious canard:

And since then, tens of thousands of utterly frightening, antimale reports about sexual harassment have been aired and inked, and not a single one told from this view:

“The Sexual Harassment Quagmire: How To Dig Out” (This is comprehensive look at what I think is the sexes’ most alienating and destructive behavioral difference.)

See the related Forbes commentary “Business Must Stop Coddling Women In The Workplace.”

For a more in-depth look at the gender wage gap and other issues, see:

“The Doctrinaire Institute for Women’s Policy Research: A Comprehensive Look at Gender Equality”